BORGO SAN LORENZO: This town was born around a court of the Ubaldini family, where once there was an ancient roman village, it has always been the most important town of the Mugello area, because it is situated in a good position from the economical point of view, in fact it is near the two roads which connect the valley with Florence: via Faentina and via Bolognese.

After the domination of the florentine bishops, to whom the district rebelled in 1273, it became a municipal district. Mugello has always been a passing land, and for this reason it has been the scene of very violent fights and struggles for centuries, until the second post-war period. These fights have caused the destruction of many buildings and all the consequent reconstruction: it doesn't remain much of the walls around the town built in 1351, and the town center has been completely restored.

Its strategical importance for commerce and its far origins contributed to make of Borgo San Lorenzo a town, which today offers many attractions and interesting activities for people living in Mugello, and for people who decide to visit it. 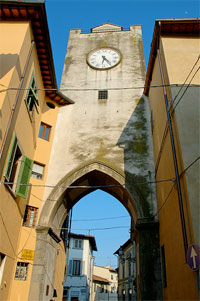 There are many sacred buildings of great artistical interest in this area: from the Pieve of San Lorenzo, to the Pieve of San Cresci in Valcava, situated in a wonderful position, on a hill, along the road to Sagginale, to the Oratory of Madonna dei Tre Fiumi, built in a place where it is narrated that the figure of the Madonna appeared to the believers. In the oratory is conserved a "Madonna with Child" of the 16th century ascribed to Jacopo Chimenti.

But there is not only sacred art in Borgo, it is also possible to visit the Praetorian Palace, today seat of the municipal council, Villa Pecori Giraldi (only by appointment. For info 055/8457197), built in the 13th century with wonderful interior decorations in liberty style. Inside it there is the Museum of the Chini Manifactures, from this laboratory come many of the sacred and non- sacred buildings decorations of Mugello.

Moreover, in Borgo San Lorenzo there are a lot of village festivals and events, particularly for the saint patron (S. Lorenzo, 11th of august), but also during the rest of the year there are very important events such as "Live the sport", or the famous race 100 Km del Passatore, when people gather together along the main roads to see the marathon runners.

Even if there are any particular events, Borgo remains an interesting town and a perfect place to spend a relaxing week-end or to make a nice trip in the coutryside.