PALAZZUOLO SUL SENIO: Palazzuolo is one of the districts of High Mugello. It is situated in a connection area, near to the street which led to via Faentina, a wide communication channel in the ancient times. From the 12th century the Ubaldini were Lords of the town, they rendered it a a commercial and exchange center. In the 14th century the town was ceded to Florence; then it became a vicariate and then, under the Medici, it became, together with Marradi, seat of a captaincy.

During the last century Palazzuolo lived the typical events of this area, in particular during the World Wars, through alternate land peopling and depopulation, caused by epidemic and progressive industralization. 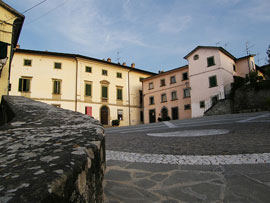 Palazzuolo, as the other districts of Mugello, has in its area many buildings of great historical and artistical interest, such as Palazzo dei Capitani, the Sanctuary of Madonna della Neve in Quadalto, or S. Stefano's Provostry, which conserves inside a shovel representing the "Madonna with Child and other Saints", of the 16th century. On the hill which overhang the town there are the ancient ruins of the Castellaccio: they are interesting because to reach them it is necessary to walk through an amazing landscape.

Palazzuolo in fact is a town filled with green, it is perfect for who loves to spend holidays in the nature. The best period is autumn: the season of chestnuts and all the special dishes prepared with them.

Palazzuolo, with its artistical and natural richness, is the ideal place for a nice trip, to relax and enjoy the typical environment of High Mugello, which although human interventions of the last years, has mantained many typical characteristics of the towns situated far from the big cities.