VICCHIO: The area of Vicchio is populated since ancient time, but the town grew for importance at the end of the 13th century, when Florence began the creation of the so called "new lands" in Mugello to take the control of these areas and stop the feudal power of Ubaldini. Vicchio grew rapidly for importance and economical power, until it became seat of a Podesteria, suppressed at the end of the 17th century.

Vicchio is remebered by the inhabitants for being one of the stronghold of the partisan resistence, during the Second World War and it is famous because it is the place where Giotto and Beato Angelico were born.

Vicchio is a nice town which offers to its visitors many attractions. There are a lot of interesting places to visit, above all Giotto Square, the main town square, here there is the ancient Palazzo pretorio, today seat of the municipal council and the Church of S. Giovanni the Baptist. In the district of Vespignano is situated Giotto's Birthplace, while in the district of Barbiana there is the Church of S. Andrea a Barbiana. Following the tracks of famous personalities in Vicchio, we find the Museum of Beato Angelico. 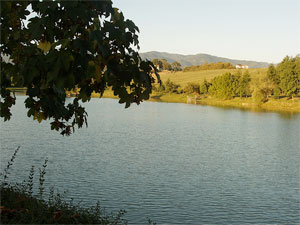 The artistical heritage in Vicchio is undoubtely rich, but also the natural aspects are not to be undervalued: first of all, between a visit and another... what about a nice stop Montelleri Lake's banks, for having lunch, enjoying a good ice cream? And than, if you have the possibility, go for a trip in Gattaia: the road to reach this town is pictoresque, it is a typical country road, with a wonderful landscape of the surrounding mountains.