MARRADI: Marradi is one of the districts of High Mugello, together with Firenzuola and Palazzuolo sul Senio.

The first group of people lived on the right bank of the River Lamone, along the Roman road (maybe built in 59 b.C.), which connected Faenza with Florence and Lucca. In the Middle Ages it passed under the domain of the Church; in that period many churches and abbeys were built in that area.

After a long period of fights between Guelfi and Ghibellini, Marradi passed in the 15th century, under the protection of Florence: fights between the Florentine Republic and the powerful family Medici, represented a dark period for Marradi, which then rose under the Lorena, and it became stable from the political point of view. Marradi is now an important place of exchanges, thanks to its position between Tuscany and Romagna. 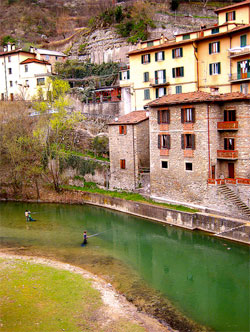 Today this town is an important center of the Tuscan-emilian Appennine, thanks to the construction of the train line Ravenna-Florence, but above all it is important because it is the place were Dino Campana was born, to him is dedicated a poetry prize.

A history so full of events left to Marradi as heritage the typical, picturesque aspect of all the villages in Mugello. It has different kind of buildings, which illustrates the history of this town through the centuries: it is possible to visit a Romesque church, as the Badia del Borgo, or the Church of S. Lorenzo Arcipretale, rebuilt in 1785 with neoclassical forms, inside there are three tables representing S. Lorenzo, the Madonna with Child and S. Giovanni the Evangelist; or, for the ones who love 18th century architecture it is possible to visit the Town Hall, or the wonderful Theatre Animosi, some of the most interesting buildings from the historical and artistical point of view.

In October the town animates for the famous chestnuts festival: take this chance to visit Marradi and enjoy the landscape from the steam trains, connecting in this occasion Marradi with Florence, Bologna and Rimini!