Tuscan cuisine is famous because it uses simple ingredients, this characteristic is true also for the cuisine of Mugello. A stay in this land or also a day long trip, can be rendered unforgettable by a good lunch or by a dinner in a restaurant, an inn or at a festival.

Here we indicate only some typical dishes and, anyway, it is always better to ask for an advice.

You can choose among many starters, from the famous chicken liver crostini, to the tuscan starter with tuscan cold sliced meats, or the fried polenta with mushrooms or a delicious bruschetta (garlic bread with fresh tomatos and haromatic herbs).

Among the first courses you can choose many salad, such as panzanella (tuscan salad with tomatos, bread and onion) or some rustic soup, or decide to eat pasta so, how not to be tempted by a dish of tortelli stuffed with patatoes, or tagliolini with mushrooms sauce or with truffle sauce, or ravioli stuffed with ricotta and spinaches? For the most exigent people there is another kind of tortelli, prepared generally in autumn, we reccommend to taste it: tortelli stuffed with chestnuts, more particular, but very good.

You have an embarrassingly wide choice also speaking about main courses often prepared with game: venison with cream, stewed venison, mugellan duck or the most famous cut beef with rucola.

To end, we reccommend the pecorino cheese produced in Mugello and after a good coffe, in Christmas time, try the liquor Gemma d'abete (fir gem) produced by the friars of the monastery of Monte Senario.

Lightly toasted slices of bread spread with liver paste, which is made from chicken livers, capers, anchovy fillets, chopped sage leaves and butter. Originally this spread was called peverada and was made using saffron which was widely grown in the countryside around the city.

Simply and easy... Bruschetta is an appetizer made with tuscan bread, tomatoes, fresh basil, and olive oil. It's probably the most wonderful appetizer during fresh tomato season. Try it and you'll be hooked!

In Mugello, the pappardelle (broad strips of freshly cooked pasta) are traditionally placed on top of the wild boar sauce and then gently mixed through and not vice-versa, as this method.

Another surprisingly tasty Tuscan use of leftover bread. Essential to the tastiness of it is top quality extra virgin olive oil, good red wine vinegar, the bread and of course flavorful tomatoes. Panzanella is a bread, tomato and onion salad. It can be prepared ahead of time and refrigerated for several hours or taken on picnics. Remove from refrigerator an hour or so before serving. 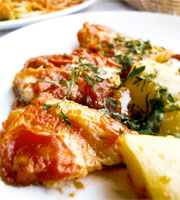 Wash and clean the leeks, chop into thin rings, put in a frying pan with the warmed oil and cook gently. Rinse the dried cod, cut into medium-sized chunks, coat with flour and add to the leeks. Brown the fish on all sides, taking care not to let it stick to the pan.
Add the peeled and chopped tomatoes and cook over a low heat for twenty minutes. Sprinkle with chopped parsley and a good pinch of freshly ground black pepper, if like.
Usually you should not need to add salt to dried cod, but do taste it to check before removing from the heat.
Cod is freshed in the Artic or Antartic and is known either as baccalà or stoccafisso.
Baccalà is preserved by salting and has four days to remove the excess salt, while stoccafisso is dried in the open air and has to be soaked for fifteen days then pounded and flaked. Recipes by Art of Cookery

The term "rosticciana" or "rostinciana" refers to pork ribs in Florence.
Cut the ribs into sections about three centimetres thick. Put in a large frying pan and add the rosemary, garlic and a glass of water. Cover and cook over a low heat for about an hour, turning frequently, until the water has completely evaporated. Increase the heat, add the salt and wine and allow to reduce gradually, browning the meat evenly on all sides. The ribs can also be roasted in the oven: put all the ingredients together in a rectangular, aluminium oven dish and roast for forty minutes at 180° C. If you have a charcoal or wood fire, or barbecue, you can cook them on a warmed gridiron for about an hour until golden. Sprinkle with salt before bringing to the table and serve with beans in oil or sautéed spinach.  Recipes by Art of Cookery

Cut the courgettes into sticks about five centimetres long. Bring the water and vinegar to the boil and plunge in the chopped courgettes. Cook for fifteen minutes, drain and leave in the colander for twelve hours.
Put into a glass preserving bottle, interspersed with cloves of garlic, fresh rosemary leaves and a little salt. Cover with olive oil and close the bottle firmly. Recipes by Art of Cookery