It's the Moto GP circuit most famous!

The total length of the track is 5.245 metres, divided almost equally between straights and curves. The curves take up 48,5% of the total lenght of the track: there are 15 turns, 9 to the right and 6 to the left. The width of the track varies between 9,6 and 14 metres. The longest straight is in front of the pits and is 1.141 metres long. The circuit is situated at 292 metres above sea level and has a total variance in altitude of 41,19 metres.

Read more about the Mugello circuit:

Some days is possible to drive in this beautiful circuit.

Valentino Rossi during a race. 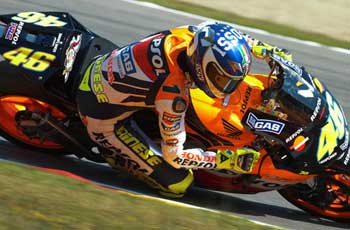