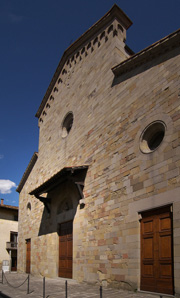 Dating back to 941, the church is the largest Romanesque building in Florence’ countryside. Inside the church, some beautiful works of art are well-preserved, including the sole Giotto's work in Mugello, the "Madonna with child".

The building dates back to the middle of 12th century and has been redecorated in 1934, after many damages it suffered because of an earthquake of 1919. The Praetorian Palace, nowadays known as the "Palazzo de' Podestà", is the town library.

Oratory of the SS. Crucifix of the Miracles 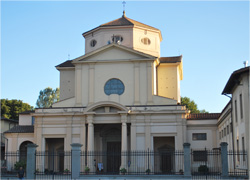 This oratory was built during the first half of the 18th century to house a wooden cross, which had recovery powers. Inside there are considerable Carrara marble floor and other decorations realized with very precious marbles. Today it is still shown to the congregation only to celebrate some festivity.

The statue of the "Dog Fido" 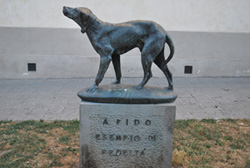 This little and singular monument is situated in Dante's square, near the Town Hall.

From the artistic point of view, it is not particularly noteworthy, but the story behind its building is very touching. As a matter of fact, it is told that this little dog was found wounded by Carlo Soriani in a ditch during a winter evening of 1941; the man decided to bring the dog home and to give it the name of "Fido".

Ronta is located in the town of Borgo San Lorenzo, placed at the  foothills of the Apennines, in the valley of Ensa, a tributary of the River Sieve.

This resort offers various tourist points, including: Villa Edlmann, Villa Liccioli, Villa Gerini, Villa Pananti Moretti, the Church of St. Michael and, near by the cemetery, the Romanesque Parish.

As well as many other towns in Mugello, the origins of this village are related to the powerful Ubaldini family.

This family was responsible for the creation of the great Camaldolese Monastery of St. Peter in 1086; as a matter of fact, after the donation of some lands to the Camaldolese' order and the visit of the prior of Camaldoli Beato Rudolfo Falcucci, the project of a female monastery in Luco was born.