SCARPERIA: This town was founded at the begginings of the 14th century with the name of Castel S. Barnaba, (called "la Scarperia") for the will of the Florentine Republic, to contrast the feudal power of Ubaldini. In the following century Scarperia became seat of the florentine Vicariate and grew from the economical point of view, thanks to its position: this town is in fact located on the main road which in the Middle Ages connected Florence to Imola and Bologna.

Later, the costruction of Futa carriage road, wanted by the Lorena, excluded Scarperia from the main communication channel, reducing to artcraft tradition the production of knives, for which the town is still today famous.

The beauty of this small town made it also one of the "Borghi più belli d'Italia" (Most beautiful villages in Italy).

"I Borghi più Belli d'Italia" (the Most Beautiful Villages in Italy) is an initiative started in 2011 thanks to ANCI (National Association of Italian Municipalities) with the aim to support small villages and towns with a great historical, artistic and cultural relevance.

I "Borghi più Belli d'Italia" turned into an association that has quickly gained great success, also thanks to the clearness of the criteria of admission, such as architectural harmony of the urban fabric, the quality of the building estate and the livability of the village.

The countryside of Scarperia 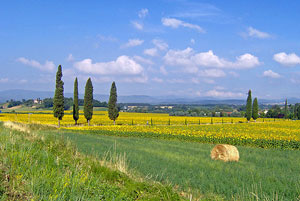 Scarperia is a nice medieval village, it worth visiting it, even if only for one day: there are a lot of interesting things to see, starting from the Palazzo dei Vicari, on the main square; in front of it there is the Church of SS. Jacopo e Filippo. On the same square there is also the Chapel of Madonna di piazza, where the already designated Vicars went to swear faithfulness to the Florentine Republic. Among the sacred buildings in the district of Scarperia, we signal the wonderful Pieve of S. Agata, in the homonymous district, the Pieve of S. Maria a Fagna and the Oratory of the Madonna del Vivaio, a building dated 1724, easy to reach from the town center, trough a suggestive stone staircase.

Scarperia, is famous for the handmade production of knives, to whom is dedicated the Museum of cutting knives. The town is seat of numerous events and festivals: the event which absolutely attracts the greater number of people is Motomondiale, held in the Autodrome, to the north of the town. But for the one who loves to enjoy time in relax, maybe tasting a good dish of tortelli, there are many alternatives. There is the possibility of making long walks and the landscape is ideal for people who like to relax their mind from the daily stress.