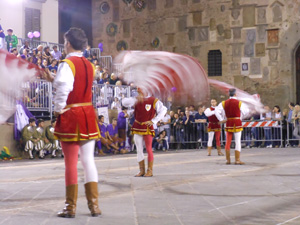 The festival of the Palio del Diotto is the commemoration of the position of the new Vicar of Scarperia (who was changed every six months).

At the sound of the bell tower at 9 pm, the doors of the castle open and, with the sound of trumpets and drums, the historical parade comes out accompanying the old Vicar and moving toward Florence door to welcome the new Vicar.

Therefore the historical parade meets the new mayor (Vicar), parading through the streets of the town: sergeants of the eight guard and a nurse, valets with the gonfalon, the valet who keeps the key of the town, the new and the old vicar, a herald, notaries, noble ladies of the vicariate, bridesmaids, musicians, flag flyers, judges, the four captains of the districts.

After the ritual greetings between the two Vicars, the parade goes to Piazza of Vicari, where the new Vicar takes the oath to the Florentine Republic.

Soon after, the Palio del Diotto begins and the 4 districts of the town will compete in the following games: Launch of knives, Greasy Pole, Tug of War, Run on bricks and Run in Tubs.

The games alternate with performances of musicians and flag flyers of Castel San Barnaba and the Uffizi.