FIRENZUOLA: Firenzuola, whose name means "little Florence", has been contended from the beginning of the 20th century between the domains of Tuscany and Romagna. This town was built during the first half of 1300 by the district of Florence to contrast the power of Ubaldini, a family which at that time dominated Mugello almost unopposed. Town walls were built in the Middle Ages and they are still visible today.

It became an indipendent district in the 14th century, few years after the opening of Giogo, a road which contributed to the town prosperity, by rendering it a passing land for travellers coming from the north. Then, in the 15th century it was rebuilt for the interest of Lorenzo the Magnificent and for a certain period it was governed by Niccolò Machiavelli.

In the last century, during the Second World War, Firenzuola has been destroyed and completely rebuilt.

Firenzuola is today one of the districts of High Mugello and an interesting medieval village situated in a fascinating position, steeped in the green of the Appenine woods where the icy waters of Santerno river flow. On its banks you will find a lot af people in summer trying to avoid the heat.

The square of Firenzuola 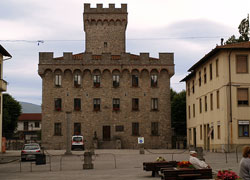 A lot of events are inspired from the natural heritage of this land, such as, From Wood and from Stone or the Festival of the Mousseron Mushroom and all the museum in Firenzuola.

This town has been many times besieged, destroyed and rebuilt, so there remain only few elements of its originary aspect: the two gates, porta Fiorentina and porta Bolognese, some traces of the ancient boundary walls, realized during the 15th century by Antonio da Sangallo the Old, the Rocca, where today has seat the municipal council, and the Museum of pietra serena.

But this is not all: in Firenzuola and around it there are a great number of sacred buildings such the Pieve of Cornacchiaia or the Abbey of S. Pietro a Moscheta.