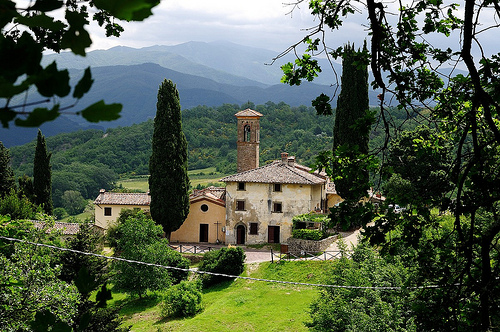 Son of a wealthy family of Florentine intellectuals, in his youth he cultivated his passion for painting, studying first as a private, then at the Academy of Brera in Milan. Just because of his passion he found himself, in the summer of 1942, during a vacation Gigliola (Montespertoli), to fresco a chapel; here he unearthed an old missal that thrill him to the point of instilling an interest in the liturgy.
Subsequently this first contact with Christianity he convert himself in June 1943  (the family of Lorenzo had never been religious, if not explicitly anticlerical; in fact Milani's children were baptised only for fear of repercussions in the fascist period).

Since the period of the seminar, Lorenzo Milani had several clashes with the mind of the Church and of the Curia; he didn't understand the reason of several rules, prudences and mannerisms, which, according to him, were far from the immediacy and sincerity pronounced in the Gospel.

In December 1954, due to disagreements with the Curia in Florence, Don Milani was sent to Barbiana, a tiny, remote mountain village in the municipality of Vicchio.
In the rectory of this small village surrounded only by nature and forests, Don Milani made a beginning with the first attempt to the full time school, addressing mainly to the lower classes.

The school immediately raised a lot of criticism and received various attacks, both the church' world and the secular. The response to these complaints came in May 1967, with the written "Letter to a teacher", a work of the young of Barbiana (with the collaboration of Don Milani); in the write, along with the illustration of the principles of school Barbiana, it was an outspoken denunciation of the school system and the teaching method, which favoured the education of the upper classes, "abandoning" to the illiteracy much of the country.

Based on the experience of Don Lorenzo Milani, many other popular schools were born in the following years. He was the first who adopted the motto "I care", later adopted by many religious and political organizations.

Don Milani died on June 26th, 1967 due to a lymphoma, but also during his illness he wanted to be close to his youngsters.